In Memory of Peter Wallace 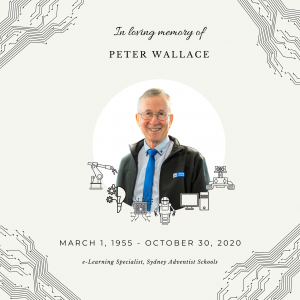 We have lost a friend and valued colleague in the Education Department. Peter Wallace died unexpectedly late Friday afternoon. Peter’s positive attitude, ever present smile, and desire to be of service to others were a joy to experience. Our hearts and prayers go out to his wife Jennifer and the Wallace family. 💐

“It is with a broken heart I write this message.

On Friday, Peter my darling husband, my soul mate, father, and the best Pal in the world died. We had two celebrations that we were looking forward to, our 40th wedding anniversary in December and his partial retirement next year. We had a good life together; I miss him dearly.

It was a sudden death and sadly some of our questions will never be answered. Peter wasn’t ill. In fact, he had been at one of the schools for work on Thursday and returned home with usual delight at how the students enjoyed what he was teaching them. No headache nor warning of what was to come.

As was his habit, Peter usually rose at night for a drink. Sometime just after 4am, I was awakened by a terrible noise and flew out of bed knowing Peter must have fallen. I suspect he had suffered a medical event that caused his sudden fall.

I was with Peter within seconds. The first of two ambulances arrived within 13 minutes. The medical teams did their best to relieve some of the pressure on his brain, but the effort was unsuccessful. Peter never regained consciousness and passed away 5:02pm that afternoon. It was International Teacher’s day.

Due to a previous health issue, Peter’s final act of service as an organ donor was not possible. But he was able to do something for the future those kids.

Rest in Peace, Peter. We will miss you dearly until we meet again.”

Read the quote from Barna on the lower right. Than

Here's Pr Gilbert Cangy sharing the Word on the pr

ADMINISTRATIVE ASSISTANT TO THE PRESIDENT WANTED!

Stewardsip Week of Prayer - Day 7 “And being in