Where Do My Tithes Go?

It was a surreal moment.  On Sunday morning, the 24th of August, at the school hall of Mountain View Adventist College, I found myself facing a sea of faces, presenting the Chief Financial Officer’s Report to the 28th Constituency Meeting of the Greater Sydney Conference.  Four years earlier, I had been one of the delegates listening to Graeme Moffitt, my predecessor, giving the Financial Report, never imagining that I would one day do the same.

There were some interesting facts in my report that I’d like to share with you, particularly about tithe. 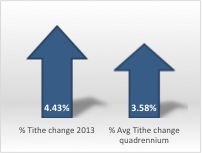 Tithe grew from $11.1m in 2009 to $12.8m in 2013, which represented a 3.58% annual growth through the period.  However, the growth in 2013 was at a higher rate of 4.43%.  One significant reason for the much higher tithe growth in 2013 was the combined evangelistic program, The Last Empire.  For the 30 churches that ran The Last Empire, their tithe growth was a phenomenal 11.26%, which means that Reaching Out, can also mean Reaching In.   Tithe giving is a barometer of our spiritual connectedness to each other and to God.

Our Conference, during the last four years, forwarded 24% of our tithe to the Union, who retained 10% and forwarded 14% to the Division, General Conference etc, and was used to support projects of national and international significance.

The tithe that is retained, is used predominately in the support of field pastors (61%), in evangelism (8%) and other ministries (9%).  Administration, which includes Safe Places, WHS, Finance and Administrative support, comprises 19% of tithe use.

Our tithe comprises about 75% of all revenues coming into the Conference, and therefore is our main source of funding.  Therefore, I’d like to encourage all our church members to cheerfully continue contributing their tithes and offerings. It’s so important that we do this because our church cannot operate in a real and practical sense without this vital support.