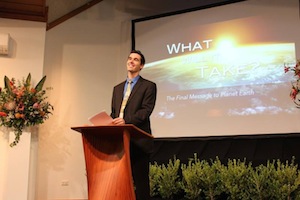 At the end of 2013, Waitara was blessed with a week of revival meetings hosted by Pr Justin Torossian. Pr Torossian, who is presently an MDiv student at Andrews University and also the great great great grandson of Ellen G. White, presented a series of powerful meetings themed on the three angels messages of Revelation 14 and God’s final call to planet earth. 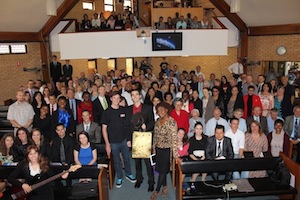 The meetings were well attended throughout the week and a tremendous blessing to all who came and were involved. In particular, the youth spent much time in prayer asking for God’s blessing upon this week of revival.

At the conclusion of the series, Pr Torossian ended with an appeal and several decisions for baptism were made – praise God! A special afternoon program was also held on the final Sabbath followed by a sacred concert with Sandra Entermann. All in all – we were truly blessed as we reached out to God together through united prayer and studying His Word. Pr Justin Torossian will be returning to Waitara in July this year for another series of meetings, so if you are in the area please join us!