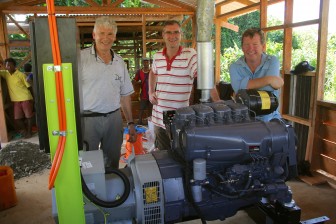 A team led by Sydney electrician, Brett Partridge and Doctor Alex Currie, recently performed an amazing transformation in the Solomon Islands.  The team comprised members from the Kellyville, Thornleigh and Avondale Memorial Churches as well as 15 Year 11 students and two teachers from Hills Adventist College.

“In the last two weeks of September, Tenakoga Adventist High School has undergone a massive transformation,” said Principal Gibson Apusae.  Tenakoga Adventist High School is a Seventh-day Adventist School, located approximately two hours by road from Honiara in North East Guadalcanal.  Most of the school’s 220 students come from the surrounding communities of Geza, Govu, Geghede and Ghombua, Salalamarau villages.  “Before the transformation we had limited fresh water, limited electricity generation capacity, and staff and students had to walk the 300 metres to the river for washing and bathing”, Gibson Apusae continued.

When Australians, Alex Currie and Brett Partridge visited Tenakoga in September 2013, they were concerned that the lack of water for drinking, washing and laundry activities and the inconsistent electricity supply, were adversely affecting education outcomes and decided to raise funds and bring a team from Australia to improve the school’s water and electricity infrastructure.  The project came to fruition in late September 2014 with all donated funds being used in improving the school’s infrastructure. 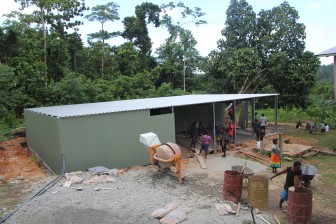 “In addition to these projects the boys’ ablution block has been substantially completed”, said Pastor Currie.  “This provides the boys with functioning showers, toilets and urinals as well as a laundry area, whereas in the past they had pit toilets and had to go to the river for bathing and the washing of clothes.  Material for the girls’ ablution block has also been provided, and this project should be commencing in the coming weeks by men trained during the construction phase along with members of the local school community.  The work could not have been completed in such a short time without the assistance of the local school community who provided labour and vehicles,” Gibson Apusae said. 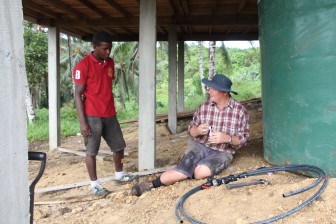 “We are grateful for all of the assistance we received in our Tenakoga Transformation Project”, the principal concluded.  “What has been achieved has been beyond our wildest dreams, and we are extremely thankful for all of the support we have received from Australia and the local community.  All of this infrastructure will help us improve the educational standards of our school”.

Pastor Currie and Brett Partridge are committed to coming back to Tenakoga Adventist High School to address other urgent needs such as the construction of a library and the provision of books and other resources to accelerate English literacy.

Note: Ken Long has launched a drive to purchase books for Adventist Schools in the Solomons to help improve their English literacy.  See “Books for the Solomons” on Facebook.