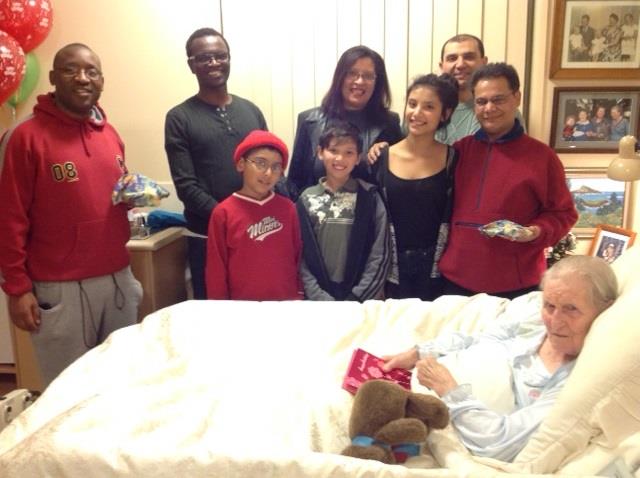 A very special birthday celebration was recently made even more special when a group of young people from Wollongong Church visited the nursing home where Sister Johanna Vogels resides. Sister Vogels, who turned 95 on the 18th of July, and her daughter, Yvonne Wallace, were very happy to see the group that included, Don, Mandy, Laura and Jarod Vallario, Pawan and Neeron Bhatta, Alan Zana and Asher Moyo, who came to sing and make her time special.

Sister Vogels has been a member of Wollongong Church since 1965, when she began to worship at the church as a result of the evangelistic campaign run by Pastor Lawson and Pastor Jack.

Sister Vogels suffers from dementia and research has shown that music is an effective way to stimulate the memories of people with dementia. One member of the group said, “She gave the biggest smile when we sang the “Happy birthday” song”. The group felt it was a privilege to have the opportunity to celebrate this very special occasion with Sister Vogels. The group enjoyed singing songs that Sister Vogels remembered, such as “Jesus Loves Me”. Yvonne said that although her mother has been in the nursing home for nine years now with her dementia, she still knew it was her special day and would like to give a very a big thank you to the group who came to celebrate with her.