The Greater Sydney Conference (GSC) has established a partnership with the Solomon Island Mission (SIM).  Currently the GSC and the SIM are discussing ways to work together.  In the future, there will be fly-and-build, fly-and-preach, clothing assistance and other opportunities.  Please pray and consider how God would like you to be involved in this partnership. 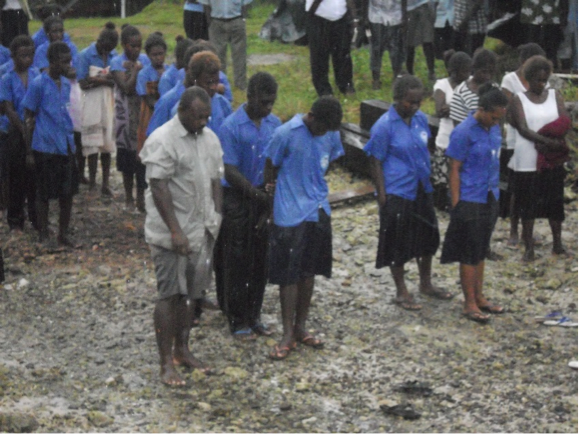 22 students braved the heavy rain and were baptised at the end of “Education Week” (16th August). According to the principal “Satan was not happy that morning because we witnessed the baptism under heavy rain.  It was very interesting because even though it rained, the students who witnessed the scene, stood under the showers, and they didn’t run away from the rain.”

The success of the week-long program was due to teachers and ancillary workers’ commitment to taking part in the evening readings.  4 students were given the task of writing up the theme and the topics so that they were displayed every evening before each session.

The highlight of the baptism was that of Ilyn Hagale.  Ilyn and her sister Grace transferred to Jones Adventist College (JAC) after mid-semester break because their family was persecuted.  Their story is filled with hardship: Their father, Hagale, a paramount chief of Kia Village in Isabel Island was impressed with the Seventh-day Adventist education system so he decided to invite the SDA church to come and build a school.

However, this did not go well with the Kia community, which is the biggest Anglican village on the island. As a result the family was harassed.  The father realizing that his two girls would be victimized contacted the president of the mission, then Mr. Kenny Elisha- the principal of JAC, to transfer his daughters.  Mr. Elisha being a very senior principal decided to accept them.  As a result one of the two girls took a decision to accept Jesus as her personal friend and saviour through baptism.

In addition to the baptisms, the students and staff collected a special offering toward tertiary education on the Solomon Islands, estimate around $1,300.00.  What a sacrifice!  Solomon Islanders have such a longing to own a Christian Tertiary Institution where they can send their children. 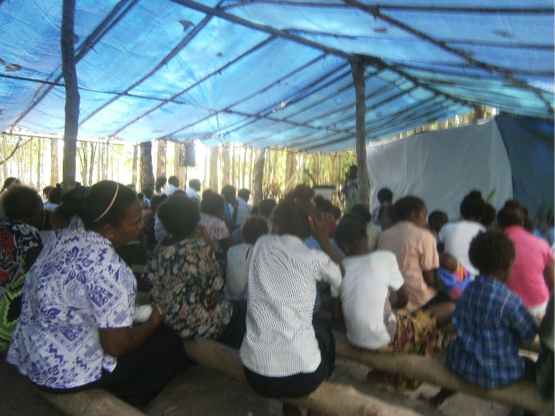 Students and parents attending the camp organized on Sabbath in order to accommodate the non-Adventist parents. Many turned up for the day meeting.

Aruligo Adventist Primary School is located about 30 km west of Honiara Township.  Its location is strategic as far as school evangelism is concerned.  The school data reveals the following:  out of the 225 students, 91 are SDA students, 114 are Roman Catholic, 19 are South Sea Evangelical Church, and 1 United Church.

Last week, the school decided to run their Education Week reading for their constituency. It was a well-organized program. Non-Adventist students were invited with their parents to attend.  The camp site was filled with parents coming to listen to the program.

The Adventist Men’s group from Betikama Adventist College came and blessed the weekend program.  As Education Director, I was very impressed with our ancillary workers and teachers sharing the holistic view of Adventist Education in practice at the camp.

Our non-Adventist parents expressed their heartfelt appreciation to Adventist Education.  They perceived their children as being part of the privileged group to attend Adventist schools. 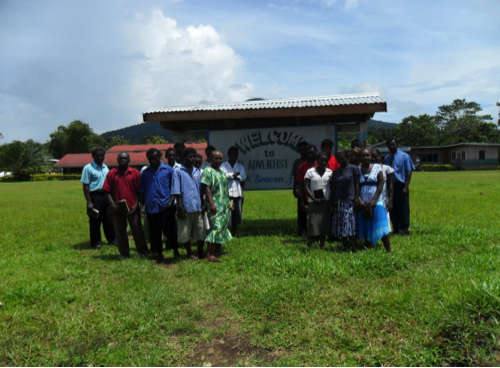 An old picture of Buruku Primary and High school. Standing are staff and newly baptised students.

I have also received a cell phone call from Mr. Naden Mostyn informing me of the success of their Education Week.  They were able to baptise 33 candidates on the closing Sabbath.  Also they collected an offering of $10,289.00 to go towards a tertiary campus here in the Solomons.

For your information, Buruku Adventist School is located on the island of Rendova.

Tuki is a two-teacher primary school located on Kolombangara Island.  The school is a remote school.  Yet amazingly, a minister handed me an envelope of money and briefed me about their education week program.  What a blessing to know that our schools are committed and proud to run their education week.

Again they collected a total of $1,050.00 towards tertiary education.

I guess if geography and communication were not a hindrance, we would have more stories from our schools around the Solomons regarding the Education Week Reading.  I for one am blessed by it, as I was invited by Burns Creek Church and Aruligo School to be their guest speakers.  And certainly our schools and parents were blessed.  The baptisms and offerings testify to the success of the Education Week.

Truly God is using our schools to be a blessing to our communities.  Please continue to pray for us.

The blessings that I receive from stories like these are only possible because our Heavenly Father is blessing our teachers and non-teaching staff.  Hence, I humbly applaud and thank them for faithfully carrying out the Gospel Commission in their work places.

Finally, I would like to acknowledge the help and support we received from our Education office from SPD, TPU and also from the volunteer groups who helped to support and build schools.