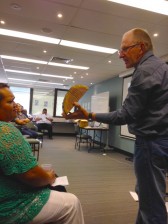 Have you heard about Pathfinder REMIX? It is an annual event where Pathfinder leaders explore ideas about managing a Pathfinder club and prepare for the upcoming year’s events.

REMIX is beneficial for clubs just starting out, as well as for those leaders who are looking to move to the next level of leadership within their clubs. In fact, leaders have different reasons for being involved.  Even still, with their different capabilities and experiences, they all have the same purpose of ministering to young people. REMIX gives them the inspiration and guidance to achieve this.

This year REMIX was held on 28 February 2015 at the Conference office, with more than 25 leaders in attendance.

There were four main speakers and two seminar sessions, which included topics such as, the best Sydney camping sites, resources for new honours, Pathfinder curriculum and volunteer involvement, engagement and retention.

The first presenter was Peter Fowler, who discussed the Conference events available for Pathfinders to attend during the year.  The larger group then split into five groups based on the interest of the group members. After this, John Wells continued the program by sharing how leaders can keep Pathfinder activities safe for children.

This was followed by Chris Nilsson, who gave some ideas and examples of activities that can be incorporated into Pathfinder meetings. The session continued with a second seminar that continued with a variety of topics.

The REMIX training program ended with encouragement and and inspiration from Dr. Jean Carter, who motivated leaders to recognise and connect with each Pathfinder member.  She also emphasised the small things leaders can do to motivate children.

In addition to being a leadership development resource, the purpose of REMIX is to motivate Pathfinder leaders to learn, develop and help children grow up in Jesus.

Contributed by Herlin Fehlberg of the Kellyville Pathfinder Club.

the purpose of REMIX is to motivate Pathfinder leaders to learn, develop and help children grow up in Jesus.