Operation Food for Life: You Are Never Too Young or Old to Serve 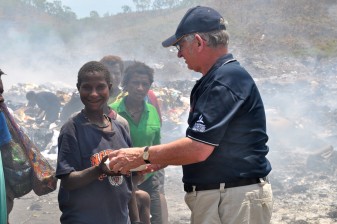 Whilst working for Sanitarium Health and Well Being Company for most of their lives, David Woolley and Dennis Perry, with the encouragement and support of the company, commenced a program in some of the  South Pacific Islands called Food for Life.

The program commenced over 20 years ago when a marginalised poor community living on a garbage dump in Tonga were provided food parcels by the small group.

Following David and Dennis’ retirement from the company some 8 years ago, they felt a conviction and calling to take this program on as their almost full-time retirement project. Many thousand of poor, forgotten and disadvantaged people, many who live in tragic circumstances, are now glad they did. Today, now named, Operation Food for Life, the program is a full-time ministry and a registered Australian charity.

There is no payroll in the ministry. All are volunteers. They come from all walks of life, all faiths, churched and unchurched alike, to support the many programs in which the ministry is engaged.  Operation Food for Life has been honoured by the Australian Patronage of the Hon Phillip Ruddock MP whilst in Papua New Guinea the Governor General of the country, His Excellency Grand Chief Sir Michael Ogio, GCL, DCMG, KStj requested to serve as their Patron in the country. 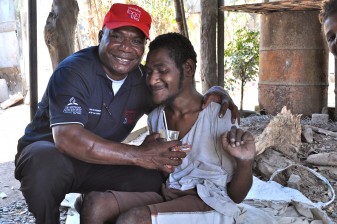 The mission statement of the ministry reads “Inspired by the example of Jesus, Operation Food for Life seeks to provide physical, emotional and spiritual support, bringing hope and dignity to the poor, forgotten and disadvantaged”, as called to do so in the the word of God found in Matthew 25-35 & 36.

Operation Food for Life continues to provide food, clothing and basic first aid to a large community living on a garbage dump, feeding, as well as praying for patients terminally ill with HIV in hospital, going to do prison ministry and so much more. Two years ago, they built a literacy school for poor children.  The school has 3 volunteer teachers and 100 children now attending. The name of the school, the Rob and Jan Patterson Literacy School, honours an SDA  couple who both gave a lifetime of service to the church through Sanitarium and passed away tragically within months of each other.

David and Dennis are quick to deflect any praise given to them. They pay tribute to Jesus.  Their greatest appreciation is for the volunteers, donors, Sanitarium Health and Well Being Company, Pacific Adventist University, Wahroonga Adventist Church’s Dorcas Society, Wahroonga Television and the team at the Wahroonga shed, for whom they provide items. Additionally, the support of the church leaders at the SPD office, in particular the Volunteer Services Department has been tremendous.

Late last year, the Hope Channel filmed an inspiring documentary on the work the organisation does. The documentary is due to be aired on the Hope Channel sometime in 2015. Dennis and David are often invited to be guest speakers at community clubs, churches, camp meetings and overseas conventions to speak about the ministry. It all started because these two men answered the call to serve and totally gave themselves away to Jesus to accomplish His will in their lives.

Want to be further inspired? Visit the Operation Food for Life web site….www.offl.org.au and make friends with OFFL on Facebook.

Operation Food for Life continues to provide food, clothing and basic first aid to a large community living on a garbage dump, feeding, as well as praying for patients terminally ill with HIV in hospital, going to do prison ministry and so much more