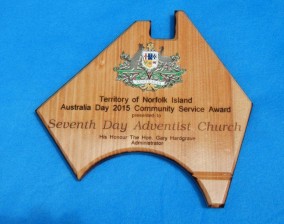 In January during the local Australia Day festivities, the Administrator handed out a number of awards; among them was a Community Service Award to the Seventh-day Adventist Church for the work done with the FoodCare program. Norfolk Island Church Pastor Dion and his wife Colleen were called on to receive the award on behalf of the Church.

The recognition represents more than five years of work done, and belongs to all who have had a part to play since the program’s inception.  In 2014, just over $32,000 was distributed, not including additional vegetables, mostly from the Administrator’s garden.  The distribution of the vouchers and veg was done by Colleen and Cynthia Quintal (one of the church’s regular attendees who has been involved in the program since the beginning).