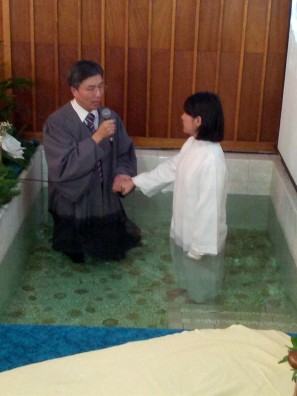 The 2nd of May was a joyous and blessed Sabbath for the Hurstville Church family who witnessed the baptism of Julia Zou and Selina Zhao-Yu Wang by Pr Jimmy Cha. Both are from China and had the gospel truth sown in their hearts before coming to Hurstville.

Julia first learned about the Bible from a class organised by the Bible Study Fellowship International (with headquarters at San Antonio, Texas, USA). She attended multiple Sunday churches in the past seven years but did not make a decision. In 2013, while bringing her daughter Helen to our basketball coaching class on Sundays, she made friends with Sisters Laura Lao and Helena Yu. She was touched by their friendliness and started attending Hurstville Church.  From there she had further Bible studies with Bible worker Helena Yu and Brother Choon Yap.

Selina, on the other hand, was brought up as a Christian by her father and attended a Sunday Christian church in Northern China. Her father first taught her about Christianity when she was nine. In 2013, a chance meeting with an Adventist at the Yarraville train station brought her to the Melbourne Gateway Church at Carlton where she did her Bible study. Two months later, she moved to Sydney and started attending Hurstville Church where she received further baptismal Bible studies from Helena Yu. While in Hurstville, she was touched by the Christ-like love demonstrated by the church family and decided to dedicate her life to Jesus through baptism. 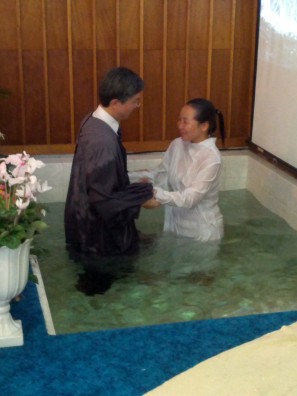 The experiences of both candidates point to the importance of Christian love demonstrated in people in the community, as well as within the church family. In Julia’s case, we also witnessed the importance of the local church engaging the community using children’s activities. In Selina’s case, we witnessed the importance of sister churches in different Conferences working together in the body of Christ. Just as Paul said in Romans 8:28, “And we know that all things work together for good to them that love God, to them who are the called according to His purpose.”

The experiences of both candidates point to the importance of Christian love demonstrated in people in the community, as well as within the church family.